All rolled up and nowhere to go…Doesn’t seem like a month since I was last finishing but it was and I’m still not in the mood to get back to finishing. But today I read there are only 17 more Fridays until Christmas (don’t tell anyone, but Christmas is 17 weeks from Thursday). Scary isn’t it?

I make a template for the top and bottom of roll-up (each roll-up should be the same size top and bottom BUT every roll-up could be slightly larger or smaller than the next one… nothing is ever simple.)

If you want to make stand up’s only, I would weight with some kind of weight. You could use a nut from the hardware store, fishing weights, pennies, aquarium gravel (I wash and dry this to get the dust) or anything to give weight. I wrap the item in cotton batting or place in handmade muslin bag with drawstring and place in the bottom of the roll-up. I don’t weight mine but I stuff them so tightly that they are heavy enough to stand up.

But I do stuff…I stuff and stuff and stuff some more. I use small pieces of Polyfill (http://www.joann.com/mountain-mist-fiberloft-premium-poly-stuffing-2lb/2179331.html).  I pull it apart and I poke the Polyfill in with a chop stick

(anything long and firm will do as a poker…large knitting or crochet needle, dowel anything about the size of a pencil).  I like my pieces stuffed firmly so I stuff until I can stuff no more. 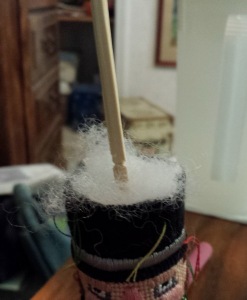 I pin the top to the roll up and ladder stitch it on leaving openings on two sides for the cording and hander.

You can also be creative and slightly pad the top for a puffy effect. Betsy has a padded top. You place three pieces of batting under the material. The smallest piece goes next to the illustration board and the largest is on top. Don’t forget to cut the material to cover this a bit larger to accomadate the filling.

TJ is a triangle top and bottom for different effect. I always saw his hat as a triangular shape. During colonial times the hats were called Tricornes (http://en.wikipedia.org/wiki/Tricorne).  So I took some liberties and reversed my triangle so the flat part is in the front…it’s called creative license and it looks better too.

And in a nut shell that’s where I am now…my fingers hurt from stuffing and sewing but I have 8 roll-ups ready for cording. I’m still deciding whether I am going to raid the work bench for an electric drill or just use the one I bought from a needlework shop…Kreinik sells one like mine (http://www.kreinik.com/shops/Kreinik-Custom-Corder-AMCDW-HD.html).

Thank you for stopping by, I hope you find time to stitch today! ttfn…sue

4 thoughts on “I am all stuffed out”

I can knit (barely), crochet with some degree of accuracy, needlepoint, and recently taken up beading.  I was taught that everyday you should learn something new, so I consider myself a needle artist in training. I may have more experience than some but I know there are stitchers out there who have forgotten more than I will ever learn. I have been a member of several stitching guilds;  completed the Fellow Level of ANG Teacher certification.
I also love to stitch using my computer…I  have done stitch diagrams for national teachers, needlework shops and my own business sd designs.
In my other life, I am a wife, mother of 3 sons,  GRANDmother to nine GRANDchildren (only 3 girls here too) and now a  GREAT GRANDmother to 2 boys & 1 girl .